Players will find their favorite characters from across the Disney universe in this magical edition of MUNCHKIN: Disney. Villains and unexpected pitfalls await in this role-playing card game where hunting for treasure, lining up Allies, and collecting Gear is all part of your world as you race to be the top Disney fan at Level 10. Are you ready to kick down the door and see what’s on the other side?

More Similar Items can be found on this link

There are no reviews yet.

Only logged in customers who have purchased this product may leave a review.

This website uses cookies to improve your experience while you navigate through the website. Out of these cookies, the cookies that are categorized as necessary are stored on your browser as they are essential for the working of basic functionalities of the website. We also use third-party cookies that help us analyze and understand how you use this website. These cookies will be stored in your browser only with your consent. You also have the option to opt-out of these cookies. But opting out of some of these cookies may have an effect on your browsing experience.
Necessary Always Enabled
Necessary cookies are absolutely essential for the website to function properly. This category only includes cookies that ensures basic functionalities and security features of the website. These cookies do not store any personal information.
Non-necessary
Any cookies that may not be particularly necessary for the website to function and is used specifically to collect user personal data via analytics, ads, other embedded contents are termed as non-necessary cookies. It is mandatory to procure user consent prior to running these cookies on your website.
SAVE & ACCEPT

Welcome to Plush World
Choose one of our represantatives to chat with on What's App or send us an email on plushworldmalta@gmail.com 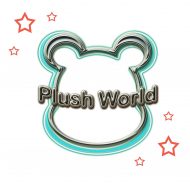 Support Cari A. M Available from 10:00 to 20:00 Available on SundayMondayTuesdayWednesdayThursdayFridaySaturday

Support Yasmin A. A Available from 10:00 to 20:00 Available on SundayMondayTuesdayWednesdayThursdayFridaySaturday